If you just got your RasPiO® Duino in the post, these three links will be useful for you…

If you haven’t got a RasPiO® Duino yet, read on to find out what it’s all about…

The RasPiO® Duino is a small plug-on board for Raspberry Pi. It has similar functionality to an Arduino Uno, but is fully programmable from the Raspberry Pi. Once programmed, it can be removed from the Pi and used on its own.

RasPiO Duino on Pi2 and standalone

It can also be used interactively with the Pi. The Pi’s GPIO ports are also broken out on the board as well. There’s a 72 point prototyping area, with GND, 3V3 and 5V rails, where you can add your own components. 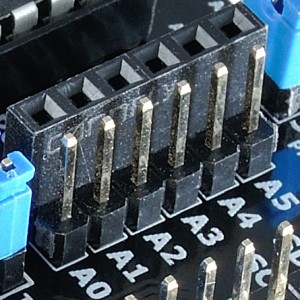 Both male and female headers for each ATMEGA port

As with other RasPiO® boards, all the ports are clearly labelled and there are lots of options. Each of the useful pins on the ATMega are broken out to a cluster of three holes. Male and female headers are provided, so you can connect whatever you like to your RasPiO® Duino.

Low Cost, Easy Introduction to Arduino Programming on the Pi 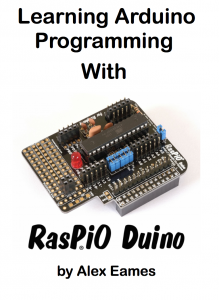 The RasPiO Duino user guide is called Learn Arduino Programming with RasPiO Duino. It contains all the information you need to get into Arduino programming on the Pi…

You can download it here, or by clicking the cover image.

How Long to Build and Get Going?

RasPiO® Duino takes about 30 minutes to build, if you’ve done some soldering before.

Once built, the software installation on the Pi (internet connection needed) will take about another 15 minutes, then you should be ready to go.

There’s an LED on pin 13, so the standard ‘blink’ sketch should work unchanged, once you’ve set everything up. Full instructions and some examples are provided on Github.

Where Can I Buy One?

RasPiO® Duino is also available from The Pi Hut, Pimoroni and Pi-Supply. 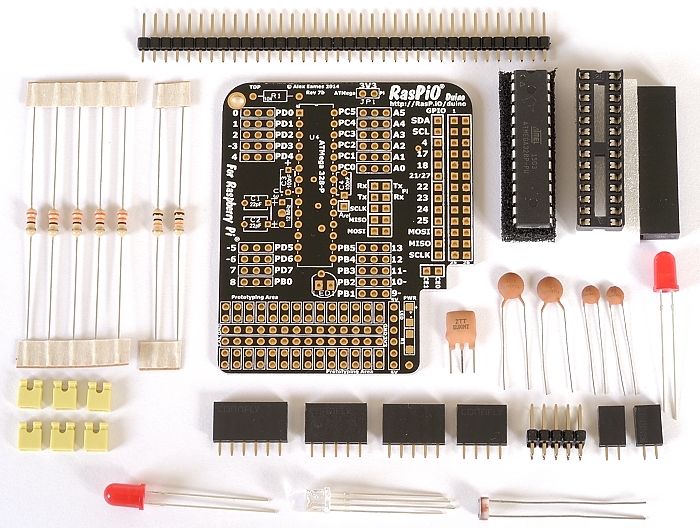 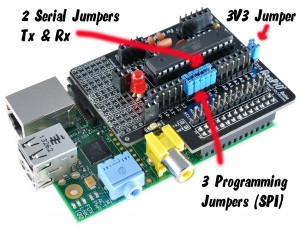 How Do You Program It?

For programming, we add three jumpers to connect the micro-controller’s SCLK, MISO & MOSI directly to the Pi’s corresponding pins.

For two-way serial communication with the Pi, if you need it, you can add two more jumpers to connect the Pi and ATMega’s Rx and Tx serial ports.

RasPiO® Duino uses the ATMega 328P-PU which is the same micro-controller chip as both Arduino Uno and Gertboard. It has a 6 channel analog to digital converter (ADC) and 14 digital I/O pins, 6 of which can also be used for PWM.

RasPiO® Duino is great for beginners, but it’s not just for beginners. There’s a host of optional features that can be used by more advanced users.

You can power RasPiO® Duino either…

Set Your Own Aref

If you want to choose a different analog voltage reference, Aref (<3v3), you can cut one track on the back of the board, add a capacitor and a header pin and connect your voltage reference. This can offer greater measurement precision with things like temperature sensors.

Use Surface Mount Components if You Want

Other Optional Tweaks You Could Do (not provided)

You could add a…

What RasPiO® Duino Doesn’t Do!